In order to advance the impact of women in media they must be safe to do their work. Violence against female journalists - physical or digital - is a double attack on their sex and their profession. IAWRT facilitates:

The Journalism and Media International Center (JMIC) in Norway, is funding an Arabic Translation on IAWRT's safety handbook for women.

JMIC is a part of the Department of Journalism studies at the Oslo Metropolitan University (OsloMet) in Norway, and the translation is part of a pilot project to include IAWRT in some JMIC activities.

This official Arabic translation is due to be published by the end of 2019. This program is financed by the Norwegian Ministry of Foreign affairs and restricted to partner countries in the global south.

"... Governments and technology companies alike are struggling to prevent and respond to orchestrated online hate"

Hate speech is a key element in many attacks on the media and individual journalists, so the responsibility of journalists to protect society from hate speech is also an aspect of protecting their own safety.

Links to two resources are here: the journalist's hate speech test and the UN plan of action.

Journalists Need Skills to Assess and Deal with Risks

How to Counter Gender-based Online Harassment of Journalists

Increasingly, risky or dangerous reporting environments for women are not restricted to war zones and sites of civil conflict. It is now well documented that female journalists face far more threats and harassment in the digital or online environment than their male colleagues.

Young woman journalists work under military surveillance, are arrested and have equipment confiscated and receive death threats. Online publications are hacked after they criticise the government. Journalists face hate-trolling and are locked out of their Facebook accounts when troll army complaints trigger Facebook sanctions. "Journalists cannot sit idly by while the highest official of the land leads the attacks on press freedom and wields the machinery of government to peddle lies and deception"  writes Ronalyn V. Olea

Your donation will help IAWRT improve women's role and participation in media, to achieve gender parity in media and communications, the backbone of any equal and free society. 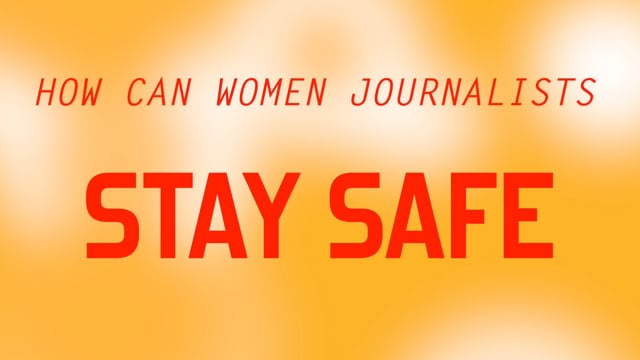 If you expect to be targeted
If you are traveling into a country where you have received threats and you have reason to believe that they may have backing from officials, make sure that organisations which can put pressure on governments to ensure your safety, are aware of your situation.
Do not travel on weekends when such groups – media unions, lobby groups, press freedom advocates  – might not be available to publicise your plight if something goes wrong.

The Grab Bag - being prepared for a disaster

Be ready for a catastrophic loss of services: water, water purification, tablets, (charcoal is an alternative), power banks, warm clothes and a communications plan for when phones are down. Try not to be in the middle of crowds where panci and anger may erit at any time. In earthquake prone Nepal journalists have a backpack under their desks. From safety workshop Uganda: participants from Nepal (earthquake), the Philippines (typhoon), South Africa (civil unrest), Pakistan (floods, civil unrest).

Turning trolling against journalists on its head: Fojo Media Institute report based on an extensive study with interviews with mostly female journalists from countries with restrictions on media freedom. Financed by the Swedish Ministry for Foreign Affairs.The study proposes an international center to devise the technical and legal capacity to find techniques for the prevention of hate and harassment and facing down dictatorships. Download full report at https//fojo.se